With near gale and dense snow showers head on, Daniel Haagensen (33) from Tomter clamied the victory in FL-600 on the very last leg towards Alta. 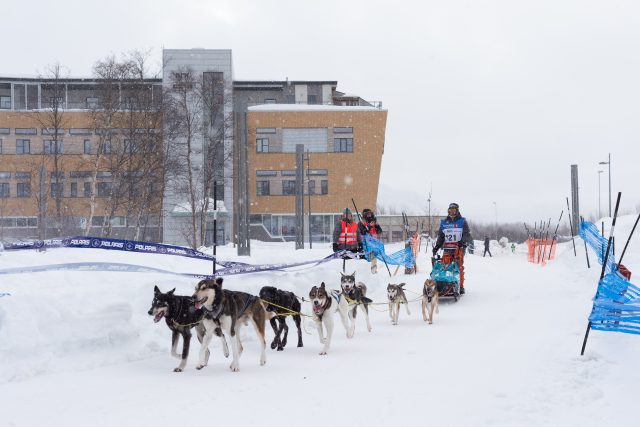 The competition in the second longest distance of Finnmarksløpet became considerably more exciting than many had first anticipated. At checkpoint Karasjok – with 132 kilometers to go – the first four teams were spread out by only six minutes.

Many had Niklas Rogne from Røros as a favorite before he left Karasjok late Monday night. But it was Daniel Haagensen who got ahead up the tough hills from Karasjok to Finnmark’s largest lake, Iesjavri.

And perhaps it was not entirely coincidental that Haagensen and his team of relatively young Alaska Huskies claimed the victory in this challenging part going up to the Finnmark plateau. The Tomter man has participated in the extreme triathlon Norseman and several other triathlon competitions.
– I made good use of my “kicking leg” going up the slopes of Karasjok, said the winner after he had finished.

His dog team this year included three dogs from musher Birgitte Næss. The borrowed dogs provided much needed experience to his otherwise young team. He has bred the other dogs himself, and several of them are younger than three years old. In other words: a team for the future. Haagensen has only been mushing for six years.

There was a tight battle for the second place in the FL-600. Niklas Rogne from Røros, Jan Kåre Heiberg from Gjøvik and Ove Grytbak, also from Røros, raced together towards Alta. Rogne claimed the silver on the very last kilometers; Grytbak won third place.

In the longer class – FL-1200 – local teams are in the lead. Steinar Kristensen from Alta arrived first to checkpoint Kirkenes close to 9 o’clock this morning. At this time he had completed 624 of the total 1202 kilometers of the race. Following him are Lasse Austgarden from Melhus, Kristoffer Halvorsen from Langhus, Kristian Walseth from Alta, Petter Jahnsen from Tufsingdal and Petter Karlsson from Sweden.