The American Iditarod winner and experienced musher Dallas Seavey arrived as #3 three in this year’s Finnmarksløp. He crossed the finish line in Alta with six dogs in front of his sled. 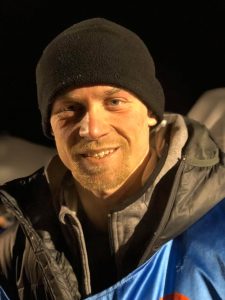 After having finished, Dallas Seavey said that it had been an amazing race. – It is very similar to races in Alaska, the same concept in many ways. But what is unique with Finnmarksløpet is that it runs in a sort of circle or a figure of eight. The area which is covered is smaller, and you get to see more of it, said Seavey. – It has been magic. At one point I go to experience northern lights at the same time as there was daylight. It was spectacular, he said.

He was not disappointed that he did not win. . – No, you can never say «I want to win this race.» I had a plan, but it kept changing all the time. We were able to get back on track, and my dogs did a fantastic job, said Seavey.

Seavey was very pleased with Finnmarksløpet. – It has been a well organized race, good check-points and good solutions for allowing the audience to follow the race. I think our races have a lot to learn from Finnmarksløpet, and I hope that we in ten years will see more of a community between mushing communities in Alaska, Canada and Norway.

He is not in doubt that he will come back: – Yes, definitely. It is a challenging race and there is always something to learn here, and that makes it interesting to come back. So I will be back, he said.